The stunning conclusion of Partnership in Blood

Yes, that's right. The Partnership in Blood series, ten years and a million words of my life, is now complete. And on Friday, October 31, the remastered versions of the first seven books will become available along with the final volume of the series.

It started as a challenge on a writers' group I was part of ten years ago. Each month, the moderators would propose a theme and anyone who wanted to participate could write a story around that theme and enter it into the group's contest. We'd critique each other's stories and then at the end of the month, we'd have a vote and the winning story would get a banner for the author's Live Journal or wherever they wanted to post it. The theme for that year's October was supernatural stories. I'm not a paranormal reader. I love fantasy of the Lord of the Rings variety, but I've never gone in for the werewolves or vampires or any of that. So I looked at the challenge and at everything else I was working on and decided I'd pass that month. I'd cheer everyone else on and vote at the end of the month. And then I fell asleep.

I dreamed that night with a vividness and clarity that I rarely have, and I woke up with three scenes etched in my memory: two men meeting in a cemetery, one of the two men stumbling out of a building at dawn, and one of the two men kneeling at a gravestone. Beginning, climax, and end (or so I thought). I knew it wouldn't be short, but I also knew I had to write it, so I asked the moderators if I could enter whatever portion of the story was complete at the end of October for the voting. They said yes as long as I promised to finish it eventually. I don't think they had ten years in mind when they said eventually, but I can honestly say I kept my promise. Partnership in Blood is now complete.

(And yes, for the record, I won that month's competition. No, I don't still have the banner.) So without further ado, I give you the final installment in my saga of love and magic in Paris and beyond: Partnership Reborn! 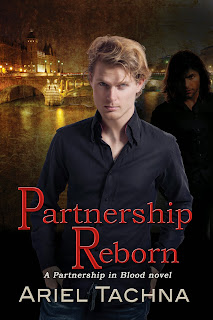 All his life, wizard Raphael Tarayaud has dreamed of a vampire—first as a friend, then as a lover. His search for his missing soul mate brings him to the attention of Sebastien Noyer, one of his childhood heroes. While Sebastien isn't his soul mate, he could be the perfect partner for Raphael's best friend Kylian Raffier.

As strange coincidences mount up, Raphael offers his research expertise to try and help Kylian and Sebastien understand what is happening to them, though the more he learns, the less he likes it. But it won’t keep him from fighting with everything he has to secure Kylian’s future.

When he finally meets Jean Bellaiche, former chef de la Cour and grieving widower, the meeting is disastrous, but Raphael can't let it go. He doesn’t stand a chance with Jean—who could compete with the ghost of Raymond Payet?—but nothing can stop him from dreaming. 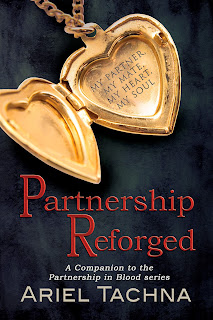 For two years, Thierry has wanted the one thing Sebastien's past denies him: an Aveu de Sang. With the help of friends new and old, he has finally assembled a ritual that will give him a close approximation of the ultimate bond between vampire and mortal... if it succeeds.
Posted by Ariel Tachna at 4:47 PM 11 comments: