Patrick loosened the tie he'd worn to work for his first day. He'd eventually have a uniform, but they weren't ready yet and his predecessor had not been the same size. He'd managed to get away early, what with it being Valentine's Day. Everyone who wasn't on duty had left even before he did, so while he felt a little guilty at leaving, it wasn't enough to keep him there.


He climbed the steps to Mikhail's little apartment, surprised to see the light on through the window. He opened the door. "Lyosha?"


Mikhail's bit back a curse as he heard Patrick's voice. He hadn't expected his lover to arrive home for at least another hour, and the apartment wasn't ready for him yet. He set down the candle he had been trying to fit into a clear glass as a holder and stepped in front of the table, blocking it with his body. "Patya. Is all well? I had thought you would be later, your first day as sheriff." He pushed a wave of hair off his forehead, thinking he should have gotten it cut before now, but he had not found the time.


"It's Valentine's Day," Patrick said. "Everyone left early. It would have made them look bad if I'd stayed." He glanced at the candle in Mikhail's hand. "I can leave again if you want me to."


"Was foolish idea," Mikhail said as he stepped forward to take Patrick into his arms. What more did he need than this? But he had wanted to offer Patrick something more, some way to show him how much the sacrifices he had made, leaving his family and his career in Chicago, meant to Mikhail. "Everyone at work talk about Valentine's Day, about plans for romantic evening with wives or girlfriends." He shrugged and bent to brush Patrick's lips. "I thought to try, but seems I am not very good at romance."


Patrick shook his head in automatic denial as he leaned into Mikhail's embrace. "I think you're very good at romance. You thought to do something for me. I don't need it to be perfect, Lyosha. I need it to be you. I love you, remember?"


"People at work told me candlelight, flowers, soft music." Mikhail turned Patrick in his arms enough to let him see the cellophane-wrapped bouquet of dark red roses on the table. "I thought to find some music once the table was ready, but...."


Patrick smiled. "You set the table. I'll find some music." He had the perfect CD somewhere in the boxes he'd brought from Chicago. He just had to find it.


By the time Patrick returned from the bedroom, Mikhail had arranged the roses in an empty glass jar in the center of the table and opened the bottle of wine he had set in the refrigerator to chill. The candlelight softened the tiny kitchen and glinted off the glasses as he filled them and offered one to Patrick.
Patrick took the glass and lifted it in a silent toast. "Here's to many more years of being romantic together." 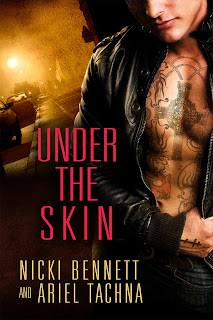 Patrick and Lyosha are featured in Under the Skin
Posted by Ariel Tachna at 9:29 AM No comments: