Welcome to Manic Monday, my new blog feature. Why Manic Monday? Well, for one thing, Mondays are always a little manic. More importantly, though, this is my list of all the romance books coming out this week that I'm aware of. Did I miss one?  Leave a link in the comments and I'll add it! Want to be included in a future week's list? You can e-mail me, send me a message on FB, a PM on Twitter, or leave that in the comments here too.

Now, on to the books!

Names Can Never Hurt Me by Wade Kelly 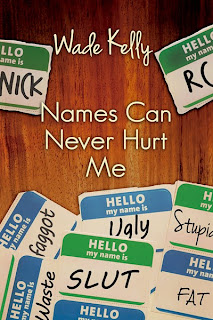 What if sexuality wasn’t a definable thing and labels merely got in the way?

Nick Jones can’t remember a time when he wasn’t part of the in crowd. Everywhere he goes, he stands out as the best looking guy in the room, and women practically fall into bed with him. Then, after kissing Corey on a dare led much more and on many occasions, Nick’s “screw anything” reputation escalated, but he didn’t care.

When Nick meets RC at the restaurant where he works, it throws his whole life out of whack. Overweight, always sweaty, gay, and hairy like a bear, RC lives up to his dubbed nickname “Scruffy Dude.” He seems Nick’s complete opposite, but Nick can’t get him out of his head.

Because of peer-pressure and his fears about defining his sexuality, Nick struggles with stepping out of his comfort zone and caring about someone different than himself.  If he’s lucky, somewhere between arrogance and ignorance, Nick might find out what it means to be an adult, but if he’s wrong, he could lose everything.

The Nesting Habits of Strange Birds by Charley Descoteaux 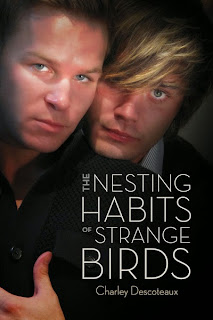 All he ever wanted was to be a normal guy….

Phil Brask spends his days in the basement of his mentor's Victorian home, converting legal documents into electronic format. When the pipe feeding the water heater bursts, Lee Redding arrives in the plumber’s truck and draws Phil away from the narrow focus of his computer and camera lens. Lee gives Phil hope for a life beyond the walls he’s constructed using the nesting habits of migratory birds and dense legal files, a guided tour through a world filled with romance and music…maybe even family. But there’s a reason Phil retreated behind those walls, why he panics at a simple touch.

Lee has a good life—working with his uncle and on his mother’s farm, playing bass in a horrible metal band, and hooking up when he pleases—but he’s always suspected something was missing. When he meets the hot photographer with the icy-blue eyes, he knows exactly what that something is. Phil isn’t like other guys, but neither is Lee beneath his carefree exterior. Maybe Lee's the perfect guy to show Phil that everything doesn’t have to be done the hard way and "home" isn't a four-letter word. 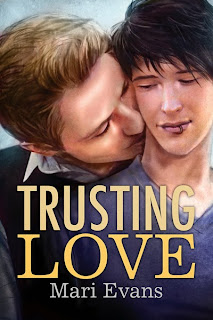 Laurie Stallon isn’t like other high schoolers. After suffering years of abuse at his father’s hands, he now lives in a foster care facility and finds solace volunteering at the local animal shelter. Laurie’s had to grow up fast, and even though his eighteenth birthday is still weeks away, he’s more adult than most adults he knows. When he meets Dr. Sam Davies, the new shelter veterinarian, the attraction is instant. They become friends at work, but Laurie knows Sam will never go for someone like him. No matter how Laurie tries to prove his maturity to Sam, Sam continues to reject him as too young.

Needing a distraction, Laurie goes out dancing for his birthday and finds his life in danger yet again. When Sam is called to the hospital, he realizes Laurie needs someone to care for him. Sam takes him home, and they slowly build a relationship. But more than their age difference works against them. Facing the disapproval of friends and the scars from Laurie's past, they'll need to put all their trust in love for a chance at a future together. 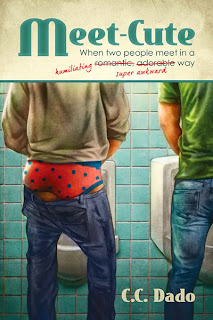 Elliot Beck may not have been blessed with mad art skills, a crooner's voice, or a godlike physique, but he makes up for it with an abundance of quick-witted sarcasm, massive insecurities, and a love of bad boys.

After his best friend Trevor finds him naked and tied to his bed—abandoned by his latest troublemaker—Trevor convinces him to take a chance on a nice guy. When he has an awkward encounter in the men's restroom with a fitness instructor named Chase, he never suspects the Adonis might be his perfect bad boy.


Nothing Special by Jay Northcote 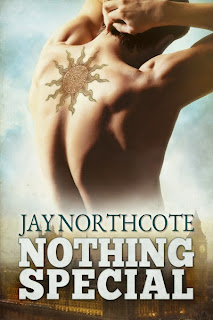 Noah thinks he’s nothing special. Average height, a bit on the skinny side, and cute but rather geeky, he’s relentlessly ordinary. He certainly doesn’t expect to be noticed by Sol, the gorgeous dark-haired stranger Noah sees on his commute home most days. But when Noah’s friend, Dom, persuades Noah to take a huge risk in a bid to get Sol’s attention, things turn out better than Noah dared to hope. Noah and Sol start dating, and much to Noah’s surprise, his feelings seem to be reciprocated.

But Noah’s insecurities make him doubt Sol. He doesn’t believe he’s interesting enough or sexy enough to hold Sol’s attention, and as Sol tries to get closer, Noah’s instinct is to pull away to protect himself. If their relationship is going to survive, Sol needs to convince Noah that he sees Noah very differently than Noah sees himself. Because to Sol, Noah is something very special indeed.

The Pillar by Kim Fielding 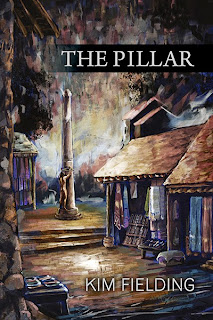 During his youth, orphaned thief Faris was flogged at the pillar in the town square and left to die. But a kind old man saved him, gave him a home, and taught him a profession. Now Faris is the herbalist for the town of Zidar, taking care of the injured and ill. He remains lonely, haunted by his past, and insecure about how his community views him. One night, despite his reluctance, he saves a dying slave from the pillar.

A former soldier, Boro has spent the last decade as a brutalized slave. Herbs and ointment can heal his physical wounds, but both men carry scars that run deep. Bound by the constraints of law and social class in 15th century Bosnia, Faris and Boro must overcome powerful enemies to protect the fragile happiness they’ve found. 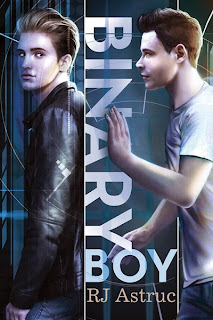 It’s a lonely life being an Interpol kid. With both Michel’s parents working for the international police force and always moving from country to country, it’s hard enough to make friends, let alone find a boyfriend. Then he meets Benny during an online chat, and Benny is everything Michel ever wanted and more. He looks forward to meeting his crush when his family heads to Australia on an important mission. But Benny isn’t quite what he seems, and it may have something to do with the man Michel’s parents are investigating and his relationship to an AI. In order to find out the truth, Michel will have to go to greater lengths—and face greater dangers—than he ever imagined.

Dream 'til Monday by Allison Cassatta 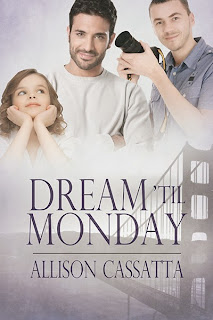 When Hollywood comes a-knockin’, a young, small-town Mississippi photographer named Sawyer Taylor packs his bags and heads to the West Coast. He’s been hired to photograph for a romantic comedy in San Francisco and looks at the opportunity as a chance to rebuild and reclaim his life. But a quick, drunken hand job behind a bar in the Castro might prove a horrible mistake.

Film director Miles Eisenberg isn’t a man who wants to commit. He has a daughter who means the world to him at home, and he worries over how his decisions might affect her. He comes up with a million good reasons not to give Sawyer a second look, but sometimes the heart is determined to love, and the brain can’t convince it otherwise. His affair with Sawyer becomes a whirlwind romance worthy of the silver screen, but life doesn't always imitate art, and imperfect heroes don't always get their happy endings. 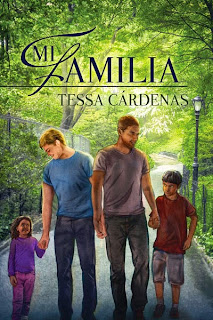 Three years after starting their life together, Jamie and Sean decide the time is right to expand their family. Preparing to adopt, they cross their Ts and dot their Is. But nothing can quite prepare them for Angel and his sister, Margarita.

After over a year in foster care, Angel, eight, and Margarita, four, are hesitant to trust their new dads.  Angel doesn’t believe they will follow through with the adoption, and Margarita, scared, refuses to speak. While the process seems slow, Jamie and Sean are happy to take their time winning the kids over. But when the siblings’ foster mother takes a fall and can no longer care for them, Jamie and Sean rush to take on parental duties they don’t feel ready for. Even as they work to finalize the adoption, life continues to throw them curve balls, and the happy couple worries they aren’t doing enough to save their fledgling family.

Upside Down by Andrew Grey

Sequel to Inside Out
Bronco's Boys: Book Two 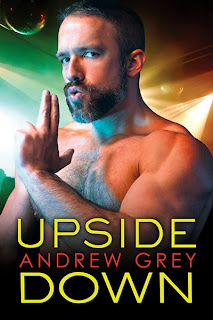 Lowell Cartwright’s life as a mercenary problem solver has taken its toll, and after one more difficult job, he wants out. For help, he turns to Bull, a soldier of fortune turned club owner—not exactly a friend, but the best chance Lowell has. He visits Bull’s club to scope it out and meets Jeremy Hodgson. The twink captures his attention in a big way. Bull tells Lowell to stay away from the club until he decides whether he can help, so Lowell stays in town. When he spots Jeremy passed out on the floor of a convenience store, he goes to Jeremy’s aid.

But trouble comes knocking when Jeremy’s place is bugged. Maybe Lowell’s past is catching up to him, or maybe the danger centers on Jeremy’s roommate Tristan’s mysterious boyfriend. Whatever the source of the problem, the future Lowell and Jeremy hope for doesn't stand a chance unless they can find a way to protect themselves.

And one from last week because I'm really looking forward to reading it and haven't had a chance yet. 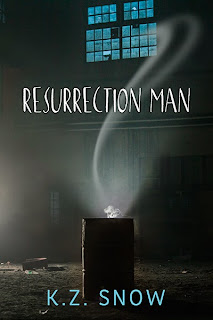 Bad enough Elijah Colter’s life of comfort comes to an abrupt end when he’s seventeen and his family discovers he’s gay. Bad enough he must live out of his car and turn tricks. But when his perfect boyfriend, Alonzo, becomes the victim of a drive-by shooting, Elijah plummets into suicidal depression. The concepts of trust and hope become more alien to him than ever.

All that keeps Elijah going is a promise he made: that he would look after Alonzo’s stepdad, Dizzy, who’s on the verge of losing his house.

Diz and Elijah become companions in homelessness—until Elijah discovers a program for throwaway LGBT youth. Through it he secures an apartment… then loses it after a year. He’s kept his promise, though, and until he can get back on his feet, he’s resigned to joining Dizzy in the abandoned factory the older man calls home.

One fall day, a pair of new presences in Elijah’s life promise to shape his future: Michael, an outreach volunteer, and Alonzo’s ghost. Both prompt Elijah to decide which of his dreams to pursue, which to cast aside, and just how much he can dare to believe in love, and in himself, again.

What books are you looking forward to this week?