I was thrilled to have one of my books accepted to the Dreamspun Desires line at Dreamspinner Press, and now it's available for preorder.

Unstable Stud comes out on April 15. 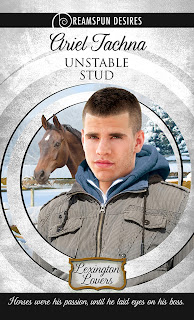 Blurb:
Horses were his passion, until he laid eyes on his boss.

Eighteen months ago, tragedy struck Bywater Farm when a riding accident killed Clay Hunter’s lover and traumatized his prize horse, King of Hearts. Clay and King lingered in limbo, surviving but not really living, until a breath of fresh air in the form of Luke Davis, a new groom in the stud barn, revives them both.

When a fall from King’s back sends Luke to the emergency room, Clay watches the shaky foundation of their budding relationship tumble down. Can Clay really love a jockey again, or will his fear of losing another man he loves keep them apart for good?


“Ready to go back outside?” Luke asked as he picked up King’s blanket. King sniffed at it for a minute before turning so Luke could spread the blanket over his back and secure it around his chest with the thin strap. He clipped the lead rope back on King’s halter and led him through the barn to the paddock.
After he let King loose, he watched for a minute as the stallion bucked and raced around the sizable enclosure, but he had work to do inside still. He couldn’t spend his whole day admiring his new charge.
He started back toward the barn, only to freeze and wish he could sink into the shadows. Mr. Hunter stood  at the far corner of the barn, watching King as well. Luke debated pretending he hadn’t seen him—Mr. Hunter had given no sign of being aware of Luke’s presence—but he owed Mr. Hunter a thank-you, if nothing else.
“He seems happy to be outside,” Luke said as he crossed the space between him and his boss.
“He’s always preferred to be outside,” Mr. Hunter said. “It doesn’t matter how cold or hot or wet it is, he’d rather be out in it than cooped up in a stall.”
“I’ll keep that in mind,” Luke said. “I can turn him out first thing in the morning and let him stay out if we don’t need him for something. He’s not likely to get out of his paddock.”
Mr. Hunter huffed a laugh so full of disbelief and irony that Luke wanted to sink into the ground. “Have you seen him jump? If he wanted out of that paddock, he’d be gone. He jumps five- and six-foot hurdles like they’re nothing.”
“I’ve seen him,” Luke said softly, “but only on TV. I always thought of the jumps as something horses did because they had to, not something they did just because.”
“For most horses, you’re right. They’d rather go around a barrier than over it, and they’ll let one stop them if they aren’t driven across it, but every once in a while, one will come along who doesn’t need the encouragement. King was one of those horses.”
“It’s a shame he’s not still competing,” Luke said.
Mr. Hunter’s face contorted with grief and anger. “He hasn’t let anyone ride him since the accident, and I won’t risk hurting him or a rider. He can earn his living as a stud. His career supports it.”
Luke wished the ground would open up and swallow him whole. He couldn’t seem to say anything right today. “I should get back to work. I have a lot to do still.”
“The vet will be here after lunch to take a semen sample. I expect you to be there to keep King calm.”
Posted by Ariel Tachna at 10:00 AM